You Are Here Home Kitchenware Reviews Why you should choose sunflower cooking oil?

Is a cooking oil extracted from sunflower seeds, rich in vitamin E and very low in saturated fat, beneficial for the immune system, friendly to the heart, helping to limit cholesterol levels tolerated by the body.

The smoke point of sunflower oil is 225 degrees Celsius, which is lower than that of soybean oil.

Considering the above comparison criteria

– Sunflower oil has a greater amount of unsaturated fat than soybean oil, which may be considered more beneficial for heart health (especially for adults). But also, it is less suitable for frying than soybean oil.

– Soybean oil also has a higher smoke point than sunflower oil, so it allows frying at a higher temperature with less worry of burning oil and producing toxic substances.

As such, sunflower oil is more suitable for raw dishes such as salads or quick stir-fries at low heat (below 225 degrees Celsius). Soybean oil can be used for frying dishes at higher heat, but be careful not to use it for baked goods. 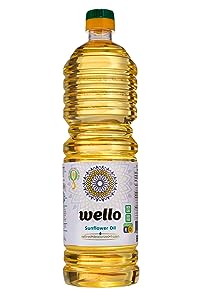 Note before to buy

– When choosing cooking oil for cooking purposes, you should pay attention to whether it is suitable for frying or not (usually noted on product packaging). If you use it for raw dishes, it doesn’t matter which type to avoid cancer, it is necessary to pay attention to the smell and taste effects on the food.

– Science recommends that it is best not to use cooking oil and animal fat for regular frying purposes, because no matter which type, more or less they also produce harmful substances under high temperature.

Best Citrus Lemon Orange Juicer with Reviews for you

[Review] What is the best bread toaster to buy?

What is the best home meat grinder that worth buying?

Best microwave stove for your kitchen

This form works with any email marketing services like AWeber, ConvertKit and MailChimp, etc.