For those who own dogs or cats, managing them when we are away is not easy, especially for those who live alone. To solve this problem, a group of developers has invented SKYMEE Dog Camera – a smart camera specifically for those who want to know the status of their pets anytime, anywhere.

All we need is an iOS or Android smartphone with the SKYMEE Dog Camera app, and an Internet connection to track all the activities of pets at home.

In terms of shape, despite being a smart camera, the SKYMEE Dog Camera has been equipped with a box-like design. The reason it is so cumbersome is because of the many features that come with it, not just the camera. On the front of the PetBot there are two highlights, that is: the camera and the hole to push the food out – it looks quite similar to the face of a dog with two ears and two food intake holes at the top. On the back of the SKYMEE is an Ethernet port for connecting to the home Internet, and a jack for powering the device. 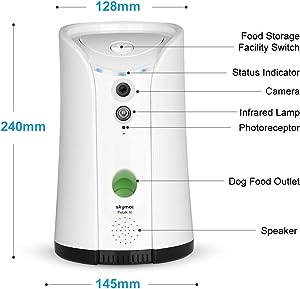 Referring to the feature of SKYMEE, it has a total of 6 main features. The first feature is the ability to play music / play audio. Users can record their own voice into SKYMEE to make pets easier to recognize. With the sound, the pet will feel like someone is at home and it will probably become more obedient and less lonely.

The second possibility is to transmit live video, or take a photo of a pet’s face. Once SKYMEE has been connected to a smartphone, SKYMEE will deliver a live video of what’s happening at home to the user’s smartphone. For those who do not have a good internet connection, PetBot will take a picture of the pet’s face when it is around, and send the image to the SKYMEE app. 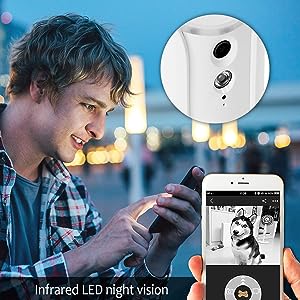 The third possibility is that SKYMEE will automatically alert the smartphone when the dog or cat at home makes strange noises. For example, our dog barks too much, and behaves strangely, is sick, or has strangers. SKYMEE will capture all those abnormal signals and send the signal directly to the connected mobile device.

The last feature is the feeding system. This requires owners to practice with their pets first. More specifically, when it’s time to eat and we are not at home, just open the PetBot app and press the play button. Pets when they hear sounds, such as those trained to eat time, will run to PetBot. When you see the dog / cat running in front of the PetBot, the user just needs to press the button to release the food for them.

Where to buy it?

Currently, SKYMEE is a fundraising project on Indiegogo. To order SKYMEE at this time, we need to spend from a smal of money to get ready for manage your pet. Order this product via the link below: 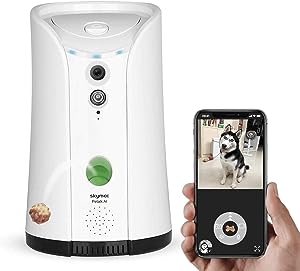 Thanks for reading & buying our product

Choose the Right Platform for your SmartHome Devices

Smart lighting solutions for your home

10 simple ways to ensure the security of your home

Best Mouse Repeller Reviews for you

This form works with any email marketing services like AWeber, ConvertKit and MailChimp, etc.